Pool Play Write Up [Ingomar]
Our Titan 7U Boys started off the Brad Mar Pine Tournament with a tough loss against Ingomar [12-5]. We gave up 10 runs in the first 3 innings and then settled in by only letting up 2 runs in the last 3 innings. We put ourselves in a hole early and couldn’t dig our way out. We didn’t go down without a fight. The boys kept battling in the field and at the plate making solid contact.
Congrats to Nate for securing our ‘Titan of the Day’ going 3 for 3 [2 singles, a triple, and 2 RBI’s]. He also played a great game at shortstop. Both the Ingomar coaches and Umpire spoke very highly about his play this evening.
Onto our next pool play game tomorrow morning against BMP and then onto the Quarterfinals in the afternoon.
Pool Play Write Up [BMP] & Quarterfinal Write Up [Ingomar]
Our Titan 7U Boys battled hard this afternoon in the Brad Mar Pine Tournament. We secured the 19-13 win against BMP in our last pool play game of the day. This setup a revenge game against Ingomar in the Quarterfinals where we were able to secure a 12-6 win and advance to the Semifinals. The boys battled hard and we were able to finish strong defensively in each game. We also put pressure on the other teams late in the game with our bats.
Congrats to Jaxon for securing our ‘Titan of the Game’ against BMP. He went 3 for 4 [2 singles, a double, and 2 RBI’s]. He is also one of our biggest supporters on the bench and cheers on all of his teammates.
Congrats to William for securing our ‘Titan of the Game’ against Ingomar. He went 3 for 3 [3 singles and 2 RBI’s] William also had a few good plays in the outfield.
[Also shout out to Jaxon for his inside the park home run today with a shot out to 208 to start our Quarterfinal game against Ingomar]
Onto the Semifinal game tomorrow morning against Seneca Valley.
Semifinal Write Up [Seneca Valley] & Championship Write Up [Hopewell]
Our Titan 7U Boys played their best complete game as a team against Seneca Valley this morning. We took on the top seeded Raiders in the Semifinals and our boys played their hearts out defensively and at the plate. Final score was 17-8 and we earned the opportunity to play our 1st Championship Game in the afternoon against Hopewell [#2 Seed]. Our boys started off slow by going down 2-0 in the 1st inning, but put on a hitting clinic in the top of the 3rd by scoring 6 runs. This was topped off by Jack G’s inside the park home run that scored 3. In the end we were able to hold off a strong Hopewell team to secure our 1st Tournament Championship by the final score of 8-4.
Congrats to Oliver for securing our ‘Titan of the Game’ against Seneca Valley in the Semifinals. He went 1 for 3 [1 single and 1 RBI]. He also stopped a few runs in the outfield by knocking down the ball.
Congrats to J.P. for securing our ‘Titan of the Game’ against Hopewell in the Championship Game. He went 1 for 3 [1 triple and 1 RBI]. J.P. single handedly stopped the Hopewell team at 2nd base by having 9 putouts and a 100% fielding percentage.
So excited to say that we are the 2021 BMP 7U Tournament Champions. 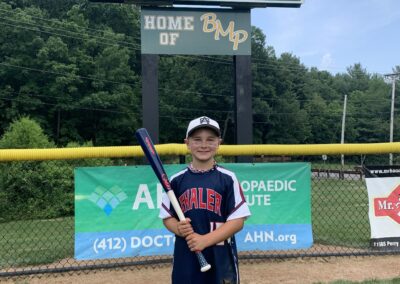 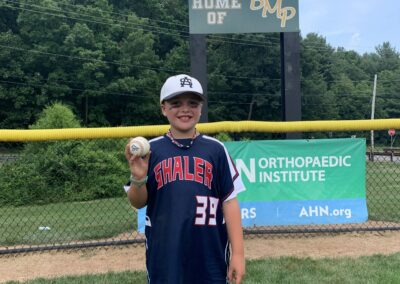 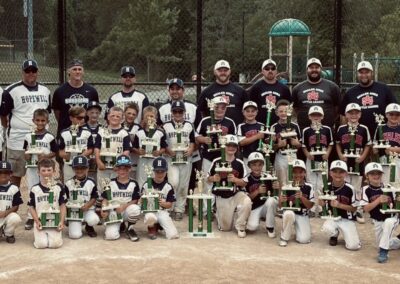 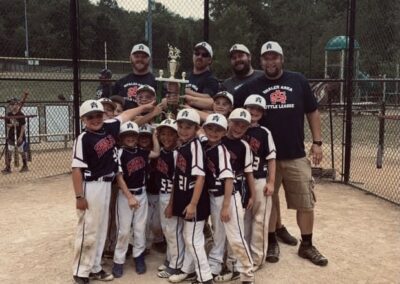 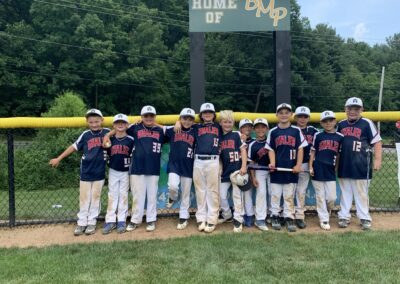